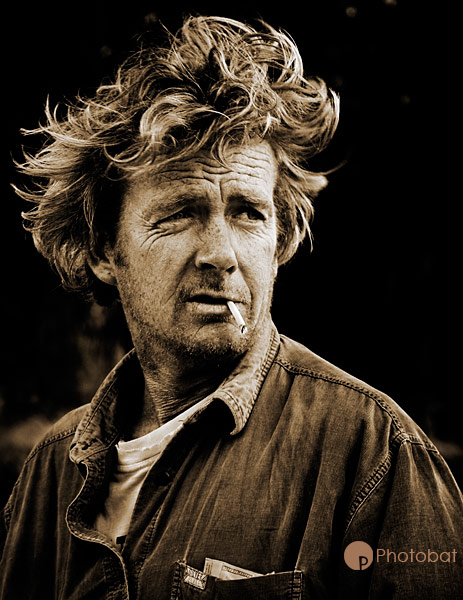 I chased this shot for about 3 years. As part of my final year uni folio I did a series of portraits of comedians and the hardest part of the whole process was getting the comedians to say yes to the shoots. There were a few phone calls, emails back and forward to Anthony via his management over a couple of months and in the end I just ran out of time. Flash Forwards a few years and I bump into Anthony in Hobart, I was a little surprised to see him and even more surprised to find he lived “just south of nowhere”. He had pretty much dropped out of the comedy world and lived about an hour south of Hobart.
We exchanged details and a couple of month later I was at his place for a couple of hours taking a few shots. To show how long ago it was I took a couple of rolls of film*and a few on my new digital camera  the Fuji S2.

I tend to know when I have a good shot, you tend to feal that you have captured something special. The trick is to not let on to the people in the photo because you might have screwed up focus, light, any number of things. I knew with this one it was a good shot. I entered it in the Tasmanian Awards, it got a silver. I entered it in the Australian Awards and it got a gold. I remember being called up while driving up Trevallyn and being told. I nearly drove off a cliff. Golds are rare and it’s something i’m still trying to achieve again. So to have one that was many years in the making is definitely a highlight.

Anthony told me after he saw the shots he went and got a hair cut. Thansk again Morgan for letting me come visit all those years ago.

*Film, for the young folk out there  is a strip of light sensitive silver halides held together with gelatin on a polymer base and was used in fold fashioned cameras to steal peoples souls