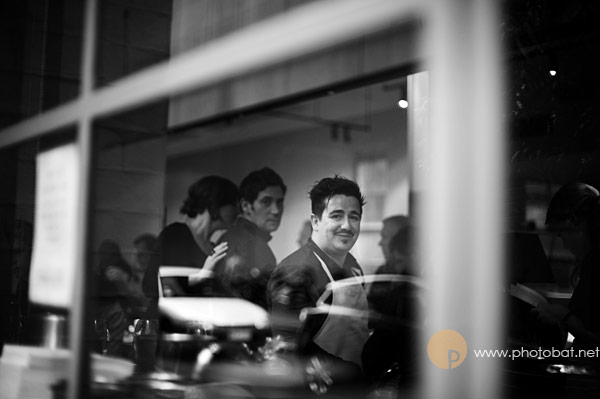 Mark is one of those guys you meet and like instantly. I first met him probably 10 or more years ago when he was making and delivery coffee at Glenroys when they used to be next to Sportsgirl, I then followed him to the new Glenroys in the Cd Centre (showing my age as none of these places exist in their old forms any more) and then onto Morties, then he made a big leap over to Mud, then an even bigger leap down to Hobart. I lost track of him for a little while down there but then managed to find him and again follow him through a couple of places. Then he disappeared again. This time to Melbourne. I had no idea where or what he was doing, until a chance conversation gave me a lead in Melbourne, a name of the place he was working. I promptly forgot that name. So when I was in Melbourne a few weeks ago I do an online trawl through cafe/bar/restaurants in central Melbourne and one of them seemed familiar even though i’d never been there… Cumulus Inc. Was it because i’d read about it in a magazine or was it where Mark was?

We went. No Mark. But awesome breakfast and coffee.

I then had the brainwave. So simple. Guaranteed way of finding Mark and where he was working. Something so basic that was going to deliver the goods.

I may have forgotten I had his mobile number.

He replied, I had the right place but the wrong time of day.

I went back the next day, Mark has progressed along way since delivering coffee around Launceston. Cumulus Inc is lucky to have a great and dedicated hospitality legend like Mark working there. He’s not so much making coffees any more, genereally running about offering good service and choosing some good wines for people to drink. Chasing Mark is fun, I look forward to the day he has his own place and I’ll be able stop the chasing.