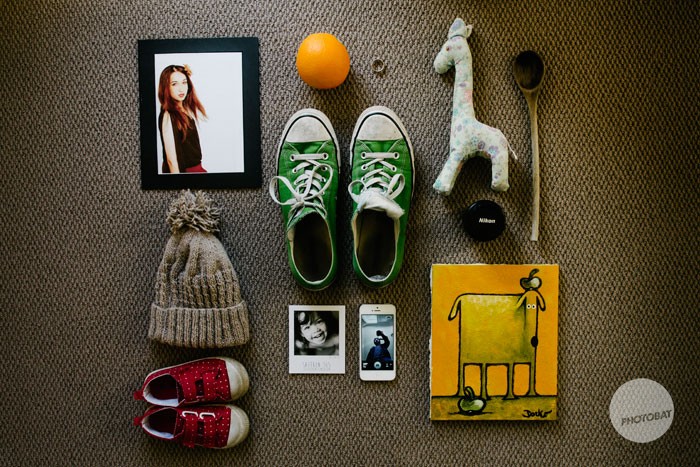 30 May Portrait of the Week | Alan Moyle | Melbourne Portrait Photography

Posted at 05:54h in Uncategorized by photobat 2 Comments
0 Likes
Share

This guys is pretty good at avoiding the camera. I finally tracked him down in his home office in Beaumaris. Asked if I could take his portrait and he was unexpectedly enthusiastic about it. We workshopped some ideas about and finally decided to add in some special objects to share a bit more of him.

The girl is the photo is his wife, shot years before they met when she did a modelling course. It’s the photo his daughter blows a kiss to and says goodnight to every night.
Orange is his favourite flavour and has no idea what flavour Fanta is, but it certainly isn’t orange.
His wedding ring is a mix of old and new, the small gold band of his grandmothers wedding ring is wedged between white gold to give it some support.
The green Chuck’s are his favourite shoes. For years he wore the felt converse skate shoes, thinking he couldn’t pull off the classics. On a whim he tried and then bought. Now he is on the look out for a matching pair for his daughter.
The giraffe is made by his wife for his daughter out of fabric that was bought in Athens on the first day of their honeymoon and carried by him (with some slight complaining) for the rest of the trip.
The wooden spoon is his cooking companion, steamed to perfection and just the right shape and size for most cooking adventures.
The beanie is knitted by his mother for his daughter. He could put more of the hand knitted jackets in the shot but this one has to symbolise all the others that he loves dressing his daughter in.
The red spotty shots are a requirement for adventures with his daughter.
The little girl is his daughter, and the project he works on with her.
The dog was bought on a brief trip to Croatia and has lived in every office he has worked in since.

Thanks to Simone for the portrait subject suggestion