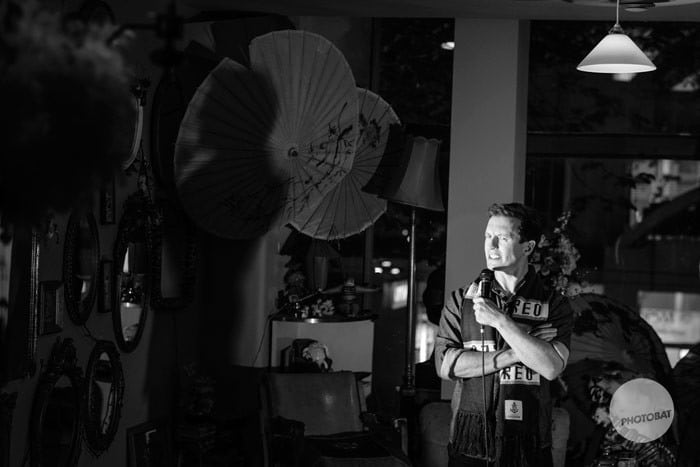 Posted at 06:06h in Uncategorized by photobat 0 Comments
0 Likes
Share

Brackets is a comedy room that happens every Friday night, and by night it’s not just early evening. It all kicks off at about 10.30pm right in the middle of the city at the eclectic Butterfly Club. It’s still a fairly new room but run by a guy with so much experience around the industry that it’s certain to last. Clayton Steele is the man with the plan and is putting together his room that has the tag line “Cogito ergo rideo” – I think therefore I laugh, so you know it’s going to be smart comedy. Add to the smartness that it’s run in association with Mensa then you have a comedy night that is part genius too.

I tagged along for the first time on Friday night and can see that the night is warm, cozy and a great way to finish a night out or to just give it a kick along. The line up last week was Richard McKenzie, Nellie White, Bart Freebairn and some little guy called Rove.

My first time seeing Bart and Nellie, both rally different comedians and ones I’ll be looking forward to seeing again. Richard is always a great story teller and then there was Rove. It’s easy to forget that he started out on the stage many years ago and still hasn’t lost his great skill on working a room and making it laugh. Even if you didn’t like him on the TV, if you get the rare chance to see him live here jump on it.

I sensed a long time friendship between Rove and Clayton, I thought that deserved a photo ( I let the lighting stay the same as what was there, so yellow but kinda nice yes?). Plus an “for old times sake” shot of Rove just because he really is such a genuine nice guy and was so supportive to me when I was just clueless first year uni student.

And also jump onto Bracket’s facebook page to see who else is coming up, you never know when a last minute special superstar guest will be added to the line up.