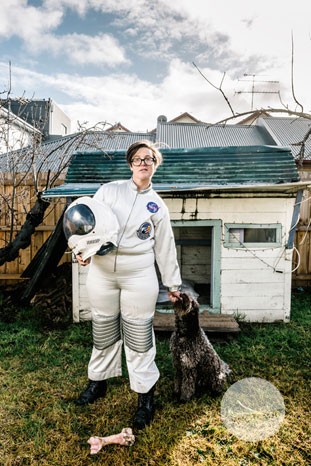 Posted at 16:33h in Awards, Behind the scenes, Comedy, personal, Uncategorized by photobat 0 Comments
0 Likes
Share

After skipping the Victorian awards earlier this year I was a bit eager to jump back into the national awards. Missing the VPPY’s was a conscious thing, to have a break… but as soon as i got the judging to be one of the judges I felt that something was missing. I didn’t have skin in the game, and it felt a little off. Still Great to judge the amazing work, but there extra buzz of waiting for my print to come up really adds to the whole experience of the Awards.
So this year, I was again judging. Judging all over the place all over the 3 days. Great to see some good work, give feedback on others that didn’t just make the grade. Of course I was judging in other rooms when three of mine came up and was relying on a few friends who were awaiting their images to relay the news to me when they were judged.
First Up Portrait Commissioned : Hannah Gadsby and Doug, Silver Award. Pretty happy with that as i loved the shoot so much and the shot is one of my new faves.
Second came Family, which is one of the categories i always love to get awards in because it has to be commissioned and real work for clients. So up to the plate came te Greegan family. Very different kind of family shot. Shots like this go either way, they go good or they plunge to the depths of “no one gets it”. Luckily the judges were on my side and gave it a Silver with Distinction Award!
Third was the Landscape category. I have previously received awards in landscape about 7 years ago and had an image sitting here that i liked so decided to throw it in. And it mixed well to come out with a Silver Award.
Last…Wedding…. another hit of miss image, I love it. Lots of other people love it. Pity the judges didn’t. I agonised over the image I entered, I had two wedding images and could only enter one… so while this one didn’t do well I’ve got hopes for the “spare” which i’ve already got ready to enter into the victorian awards next year!
So all in all, i’m pretty happy with how it went, showing skills in three different categories with some of the top photographers in the country. I’ll take the awards thanks!